You sure have produced a winning product with Bin Bombs. My girls dispose of their soiled nappies in inside bins and we cannot believe that there is only a fresh smell since putting Bin Bombs in the bottom. Quite extraordinary.

Well done & many thanks.

I’m a foster carer for the Cat Haven WA and currently have 6 of the most disgusting smelling kittens in my care. Another foster carer recommended your bin bombs. Thanks for such an amazing product! The kitten room has gone from making your eyes bleed with the stench to quite pleasant.

Cat Haven have up to 90 cats coming in a day at this time of year, many of which are kittens which go out to foster care until they are old enough to be adopted. I was thinking it would be a win-win situation if you guys were able to donate a couple of buckets of the bin bombs to the shelter so foster carers could take a scoop each with their essential kitten supplies. Once they’ve tried them I’m sure they’ll be ordering more from your shop!

Thanks Mr Green Wheelie Clean for servicing my bins but most importantly that new product you let me try, Bin Bomb.  For the last 18 months, I have had to keep my bins outside instead of in my garage where it so convenient, because of the terrible odour.

Not only can I now have my bins back in the garage, which saves me going out in the cold and wet, but I can actually smell the Bin Bomb fragrance as soon as I go into the garage, with the bin lids shut!!  Great product and so instantly effective.

We have eight wheelie garbage bins in our complex and they are all dosed with Bin Bombs every week, needless to say it always smells nice and fresh in our bin section. I personally think it is a fabulous product because it is so versatile. We use it in our kitchen bin and also in the garage. Lately I have tried Bin Bombs in my cupboards and linen closet and when you open the doors to these it’s a lovely fresh aroma that greets you. I also use the granules in a container in our walk- in robe to keep it always pleasant and fresh.

I have been looking for a product like this for a long time. At last, a dry product that keeps on keeping on with that special fragrance that makes the journey to the garbage bin a more pleasing experience – especially with a husband who throws in the bits and pieces left over from the fish he catches. Thank heavens for Bin Bombs!

Beside using Bin Bombs in my garbage bin, I also use a pinch of the product in the ashtray of my car and in my smelly gym boots (when I’m not wearing them).

I am 84 years old and when my son gave me a container of Bin Bombs I could not believe the difference it made to my kitchen bin area and to my outside bin which I don’t need to clean as often now. This is a very good product and I have recommended it to all my friends and neighbours in our block of units.

Mr Green Wheelie Clean cleaned my bins but also had a great new product that he was trialing called Bin Bombs. This product made my bins smell fantastic instantly, but he had many other suggestions for it’s use. My problem was that we have only moved into our new house 7 months ago. I have tried everything in one of the toilets to rid that stale toilet/urine smell, steam cleaning, washing walls and even ceilings, Mr Green suggested I tried Bin Bombs. I bought some small hessian bags from Spotlight, filled them with two scoups of Bin Bomb and BANG, instant freshness that lasts forever and all you need to do to revitalize the lovely smell, is give the little bag a shake once every couple of weeks. Fabulous product.

It was lovely talking with you earlier about your Bin Bombs, I thought I would send this straight away to you.

I received a sample of the Bin Bombs a week ago at our local shopping centre, I am amazed how fantastic this product is. I hung some in an organza bag in our laundry as our dog sleeps in there and it has always had a dog smell that we can never get rid of. In less than a week we have a lovely smelling laundry, it smells so good, no more dog smell.

I also put some into the bottom of the kitchen bin that I usually have to spray each day to get rid of the smell. Less than a week and our bin smells great, and so does the house. I cannot wait to purchase more of this fantastic product and share with our family and Friends.

Thank-you for such a great product.

I am a professional person and don’t have the time to wash my garbage bin every time it is empty. I am usually backing my car out of the drive way and in a hurry on bin day when I realise the bin has to be brought in. Sometimes it smells like it is still full of garbage, I mean, it really is on the nose but a few scoops of bin bombs turn this horrible smell pleasantly around within seconds and eases my conscience considerably.

I own a takeaway chicken restaurant with a drive through and I use your product in my 3 cubic metre skip bin. (Our restaurant is in the Pilbara and the heat is constant.) The bin is in close proximity to the drive through speakerbox, and even though it is out of sight, it smells terrible as it’s only emptied twice per week. One handful of the Bin Bomb product is enough after it’s been emptied to control the stench. It works so well that we only clean the bin out properly around once every 4 months. The bin bomb product is well worth the money as one 10 kg bucket has lasted over 6 months, and I would recommend it to other restaurants who have similar sized waste units.

I have never come across a product in the waste industry that actually works to expectations and the requirements for effective odour control and the fact in which it is also environmentally safe is a bonus. The product was trialled with a bin from our dedicated fish cleaning area and was in my experience one of the most rancid bins I have ever come across. A couple of scoops and the bin was smelling fresh and new again. These bins are changed out regularly from the area and have to be disposed off in landfill as even our plastic recyclers do not want them. Since commencing with Bin Bombs we haven’t replaced a bin there yet. The granules are also used in the rear of our trucks to minimise odour issues when the trucks are driving through our cafe strip.

Using Bin Bombs has solved an ongoing issue of odours associated with the storage and collection of waste. By placing a half cup of bin Bombs behind the blade of our rear loading waste collection trucks, it enables the vehicle to traverse the main tourist precincts and alfresco areas without worrying the pedestrians and patrons with odour, especially that odour cloud that hangs around even after the truck leaves the area.

Bin Bombs have been trialled successfully on two laneways that are between two licensed premises to control the urine odour issue. More trials to be conducted for the whole of the upcoming summer period.

There are several areas within the City, one of which you saw today, which turn over a high number of bins due to the contents placed into them. The one inspected today was the fish cleaning facility at Point Peron. Last summer we had to bury in landfill 5 x 240ltr bins and the year before 6 x 240ltr bins. Since using Bin Bombs we have replaced none of the 8 x 240ltr bins onsite and do not expect to have to replace any this summer. Not only is this a cost savings to the City by not having to replace any bins there but also by not having to bury the bins and lose valuable landfill airspace, but a great environmental one. The City recycles all of their old bins but unfortunately in the past the recycling contractor has requested that these particular bins do not be dropped off due to the odour issues so now when the bins are past their prime or split I will be able to have them chipped and reused into other plastic products and not buried in landfill.

As seen in the Chevron Gorgon Project Update, Issue 30, October 2012 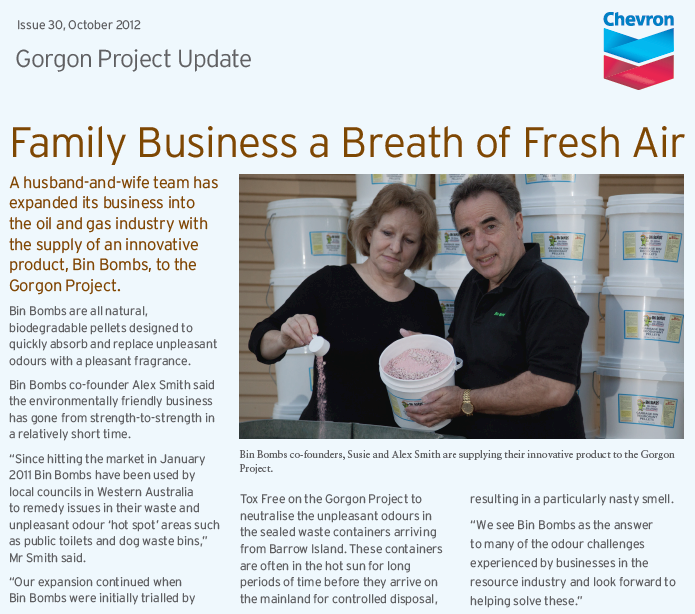 For more information or if you wish to verbally place an order, please feel free to contact our Sales Manager, Alex Smith

we are happy to answer your questions